John Hope Franklin, Scholar of African-American History, Is Dead at 94 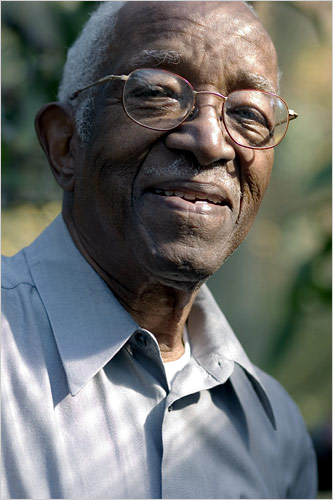 John Hope Franklin, a prolific scholar of African-American history who profoundly influenced thinking about slavery and Reconstruction while helping to further the civil rights struggle, died Wednesday, March 25, 2009, in Durham, N.C. He was 94.

A spokeswoman for Duke University, where Dr. Franklin taught, said he died of congestive heart failure at the university’s hospital.

During a career of scholarship, teaching and advocacy that spanned more than 70 years, Dr. Franklin was deeply involved in the painful debates that helped reshape America’s racial identity, working with the Rev. Dr. Martin Luther King Jr., W. E. B. Du Bois, Thurgood Marshall and other major civil rights figures of the 20th century.

“I will always think of John Hope as the historian of the South who grasped the complexity of Southern public life as shaped by the horror of personal slavery,” said Nell Irvin Painter, the Princeton University historian. “Franklin was the first great American historian to reckon the price owed in violence, autocracy and militarism.”

It was a theme Dr. Franklin wrestled with into his last years. In an article in The Atlantic Monthly in 2007, he wrote, “If the American idea was to fight every war from the beginning of colonization to the middle of the 20th century with Jim Crow armed forces, in the belief that this would promote the American idea of justice and equality, then the American idea was an unmitigated disaster and a denial of the very principles that this country claimed as its rightful heritage.”

Dr. Franklin combined idealism with rigorous research, producing such classic works as “From Slavery to Freedom: A History of African-Americans,” first published in 1947. Considered one of the definitive historical surveys of the American black experience, it has sold more than three million copies and has been translated into Japanese, German, French, Chinese and other languages.

Robert W. Fogel, a Nobel Prize-winning economist at the University of Chicago, called it “a landmark in the interpretation of American civilization.”

Dr. Franklin also taught at some of the nation’s leading institutions, including Harvard and the University of Chicago in addition to Duke, and as a scholar he personally broke several racial barriers.

He often argued that historians have an important role in shaping policy, a position he put into practice when he worked with Marshall’s team of lawyers in their effort to strike down segregation in the landmark 1954 case Brown v. Board of Education, which outlawed the doctrine of “separate but equal” in the nation’s public schools.

“Using the findings of the historians,” Dr. Franklin recalled in a 1974 lecture, “the lawyers argued that the history of segregation laws reveals that their main purpose was to organize the community upon the basis of a superior white and an inferior Negro caste.”

Dr. Franklin also participated in the 1965 march from Selma to Montgomery, Ala., with Dr. King.

“One might argue that the historian is the conscience of the nation, if honesty and consistency are factors that nurture the conscience,” Dr. Franklin said. Still, he warned, if scholars engage in advocacy as well as scholarship they must “make it clear which activity they are engaging in at any given time.”

President Bill Clinton, in awarding him the Medal of Freedom, the nation’s highest civilian honor, in 1995, said Dr. Franklin had never confused “his role as an advocate with his role as a scholar,” adding that he had held “to the conviction that integration is a national necessity.”

Yet even on so august an occasion, Dr. Franklin could not escape the legacy of discrimination. In a talk he gave in North Carolina 10 years later, he recalled that on the evening before he received the medal at the White House, a woman at a Washington club asked him to fetch her coat, mistaking him for an attendant, and that a man at his hotel had handed him car keys and told him to get his car.

Dr. Franklin’s prestige led Mr. Clinton to select him in 1997 to head the Advisory Board to the President’s Initiative on Race, which was formed to promote dialogue about the country’s race problems.

The panel, however, drew criticism. White supremacists protested at some of its forums, and at others American Indians and other minorities complained that they were being left out of the process. A group of conservative scholars repudiated the panel and formed their own.

And when Dr. Franklin’s group finally issued its report after 15 months, the document was criticized as, in one disillusioned scholar’s words, “a list of platitudes.”

John Hope Franklin was born on Jan. 2, 1915, in Rentiesville, Okla., the son of Buck Colbert Franklin, a lawyer, and Molly Parker Franklin, an elementary school teacher. His parents had moved to Rentiesville, an all-black town, after his father was not allowed to practice law in Louisiana.

In the 1920s, the family moved to Tulsa, and at age 11 he was taken to hear the great civil rights leader W. E. B. Du Bois, with whom Dr. Franklin later became friends.

His youth was marked by frequent brushes with racism. He was forced off an all-white train and made to sit in a segregated section of the Tulsa opera house. He watched black neighborhoods of Tulsa — including the one where his father had his office — being burned during the infamous 1921 race riot, and he was barred from admission to the University of Oklahoma.

Instead, Dr. Franklin attended historically black Fisk University in Nashville, receiving his B.A. in 1935. There he met Aurelia E. Whittington, who would become his wife, and sometime editor, of almost 60 years. They had one son, John Whittington Franklin, who survives him. Mrs. Franklin died in 1999.

In 1997, Dr. Franklin and his son edited an autobiography of his father, Buck Franklin. The book told the tale of free blacks in the Southwestern Indian territories in the late 1800s. Buck Franklin’s father, a former slave owned by Indians, became a cowboy and rancher, while Buck, who taught himself law by mail, was an advocate of black pride and nonviolence.

Before graduating from Fisk, Dr. Franklin considered following his father into law but was persuaded by a white professor, Ted Currier, to make history his field. Professor Currier was said to have borrowed $500 to help Dr. Franklin pursue graduate studies at Harvard. There, Dr. Franklin later recalled, he felt the isolation of being one of only a handful of blacks on campus. He received his master’s degree in 1936 and his Ph.D. in 1941.

Two years later he published his first book, “The Free Negro in North Carolina, 1790-1860,” which explored slaveholders’ hatred and fear of the quarter-million free blacks in the antebellum South. Almost 20 other books followed, either written or edited by Dr. Franklin.

In “The Militant South, 1800-1861” (1956), he described Southern whites’ “martial spirit” and “will to fight,” which he said gave the pre-Civil-War South its reputation for violence. He approvingly quoted Tocqueville’s observation that, because of slavery, “the citizen of the Southern states becomes a sort of domestic dictator from infancy.”

In “Reconstruction After the Civil War” (1961), he wrote that the end of Reconstruction reforms left “the South more than ever attached to the values and outlook that had shaped its history.” He lamented that “in the postwar years, the Union had not made the achievements of the war a foundation for the healthy advancement of the political, social and economic life” of the nation.

“The Emancipation Proclamation” (1963), written a century after the proclamation was issued, examined how it evolved in Lincoln’s mind and its impact on the Civil War and later generations. Dr. Franklin concluded hopefully, “Perhaps in its second century, it would give real meaning and purpose to the Declaration of Independence.”

And in “The Color Line: Legacy for the 21st Century” (1993) he argued that race would remain America’s great problem in the 21st century.

His major biographical project was a 1985 study of George Washington Williams, a self-educated black Civil War veteran and author of a 1,000-page 1882 history of blacks in America from 1619 to 1880. He said he spent nearly 40 years of intermittent research on the project, calling Williams “one of the small heroes of the world.”

Dr. Franklin’s first passion was teaching, and he continued to log classroom time despite his increasing prominence. His teaching career began at Fisk in 1936 and continued over the next 20 years at St. Augustine’s College in Raleigh, N.C., North Carolina College in Durham and Howard University in Washington.

As his first books drew national notice, Dr. Franklin left the world of historically black colleges and went to Brooklyn College, where from 1956 to 1964 he served as chairman of what had been an all-white department.

“Having John Hope Franklin at Brooklyn College in the 1960’s was like having a real star in our midst,” said Senator Barbara Boxer, Democrat of California, who was a student of Dr. Franklin’s. “Students who were lucky enough to get into his class bragged about him from morning until night.”

Dr. Franklin later taught at the University of Chicago before returning to North Carolina in 1982 to teach at Duke and at the Duke Law School.

At his home in Durham, Dr. Franklin continued a lifelong hobby of cultivating hundreds of orchids; one species was named for him, the Phalaenopsis John Hope Franklin.

His honors, awards, and professional and civic affiliations were so numerous as to fill several single-spaced pages of a long curriculum vitae. He received more than 100 honorary degrees.

In 2006, he received the John W. Kluge Prize for the Study of Humanities in a ceremony at the Library of Congress. In his prepared remarks he said he had long struggled “to understand how it is that we could seek a land of freedom for the people of Europe and, at the very same time, establish a social and economic system that enslaved people who happen not to be from Europe.”

“As a student of history, I have attempted to explain it historically, but that explanation has not been all that satisfactory. That has left me no alternative but to use my knowledge of history, and whatever other knowledge and skills I have, to present the case for change in keeping with the express purpose of attaining the promised goals of equality for all peoples.”